DENVER -- The sound is unmistakable and instantly recognizable. The harmonica. Invented in Germany but is now a part of the American fabric.  >read and watch the video here 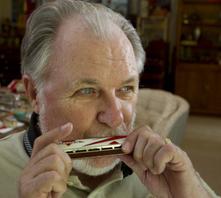 When Harland Crain tires of playing one of his harmonicas, he selects another from his breathtaking array - believed to be the world's largest private collection.

During the last 20 years, Crain has amassed more than 5,700 of the pocket size musical instruments, from rare 19th-century German made "mundharmonikas" to gold-plated harps made for the 150th anniversary of the Hohner Co., king of the harmonica makers.

"I like to collect ones that have some history." says Crain, 74, plucking a 1910 Pipeolion, a harmonica outfitted with 10 small brass trumpets, from an antique display case in the basement of his home in Chesterfield, MO.

Harland Crain plays a Hohner harmonica at his home in Chesterfield, MO

The retired electronics services business owner got hooked on harmonicas in 1992 after buying 30 of the free-reed instruments at an estate sale in nearby St. Louis.  He quickly increased his lot with the purchase of nearly 1,500 harmonicas from the estates of three longtime collectors.

Among Crain's many mouth organs, which date from the 1870's, are harmonicas shaped like cigars, compasses, cylindrical coin banks, Babe Ruth's wooden bat, triangles and zeppelins.  Crain also has walking sticks and postcards with built-in harmonicas.

"Companies went out of their way to enhance the harmonica," says Crain, president of Harmonica Collectors International and editor of the club's newsletter.

His rarest harp is a wooden representation of the "Emden," a World War I German warship.  Other treasures include a 1925 PlaRola with a crank to turn a paper music roll, similar to a player-piano and a 1960s Hohner harmonica promoting The Beatles with the names of George Harrison and Paul McCartney accidentally switched on the box.

"Harland's collection is so large and diverse and well thought-out", says fellow collector John Whiteman, 70, of San Diego, who owns 4,500 harmonicas.  "He definitely has the world's largest."

Crain enjoys talking about the history of the harmonica to civic groups and at retirement homes, where he exhibits some of his prized wind instruments.  "I tell groups that it's the only instrument where you blow and draw to make music," he says, explaining how air causes the harp's thin metal reeds, which are tuned to different notes, to vibrate and produce sound.

To expand his collection, Crain and his wife Doona, travel to antique stores and auctions in Europe and the United States in search of harmonicas, manufacturer catalogs, advertisements and displays, and photographs and movie posters featuring harmonica bands.  He's also using resources from the Deutches Harmonika Museum in Trossingen, Germany to help document his collection for "Guinness World Records."

Donna, 67, enjoys her husband's collection because it evokes memories of listening to her father play "Ol' Man River" and imitate a train whistle on his harmonica.

"My dad's sister slipped a harmonica in his pocket when he left for the Army," Donna says.  "He learned to play while on a troop ship headed for Europe during World War II."

Though Crain's harmonica playing skills are rudimentary, his appreciation for the small but mighty instrument is indisputable.  "I tell people you don't have to be a painter to collect a Rembrandt," he says.